When I was a kid, one of the coolest things to me was crossovers.  I still remember the anti-drug Saturday morning special that teamed Garfield with the Smurfs.  It had everyone from Alf to the Muppet Babies in it, and it blew my little 11 year old mind.  About a year ago I got the idea that I wanted to create a similar experience for my daughter.

It started as a sketch on the paper tablecloth at Macaroni Grill.  I was drawing some Muppets for her, and I added some other Disney characters as well.  That’s when the memory of every cool crossover event I’d ever seen came rushing into my head.  That comic where Spider-Man met Superman, those times the Happy Days folks showed up to hang out with Laverne and Shirley, and even those recent ABC commercials featuring many characters from their most popular shows living in the same house.

I quickly began to make a list of every character that Ruby liked at the time and decided to paint a picture of all of them hanging out together.  It wasn’t long before I realized that there were far too many characters for one picture, so I would either have to turn her ceiling into a grand fresco, or else split the project into more than one picture.  The thought of just using fewer characters never occurred to me (until just now, actually).

I bought paints and canvases.  I made a mock-up on the computer of how I wanted the finished project to look.  And then I let it sit for months.  Sadly, this is a problem I often have.  I’ve got plenty of ideas, but not that much follow through for large side projects.  In fact, I can’t believe I’m still blogging, two weeks after having the idea.

Eventually I decided that I ought to get started, and I penciled in the characters for the first painting.  My new idea was that it could be a continuing work of art, and if I put all the youngest skewing characters in the first one, someday she could take it down and replace it with one of Hannah Montana in a hot tub with Nancy Drew, watching The Jonas Brothers play volleyball with Edward and Jacob.

It was going to be a surprise, but it was a little too big to hide for long, so of course Ruby wanted to know what I was doing, and more importantly, what Big Bird was doing with Handy Manny and the Doodlebops.  I told her they were all having a picnic in the park, and it was her idea to name it Ruby Park.  And then she demanded that there be a sign that said Ruby Park.  And suddenly she had her own list of who ought to be coming to the party.

I had planned on doing three pictures, but when she realized I had not included any princesses, I realized there would have to be four to start.  I finished the fourth picture last night, just in time for me to leave for New York tomorrow morning.  I hope she thinks of me when she sees them on her wall.  I hope she someday realizes how much love and hard work went into such a huge undertaking for someone who had never before put brush to canvas.  But most of all, I hope she thinks they’re ridiculously cool. 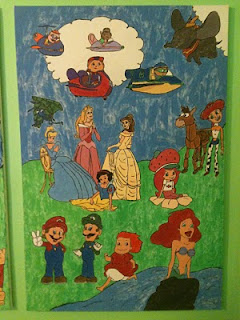 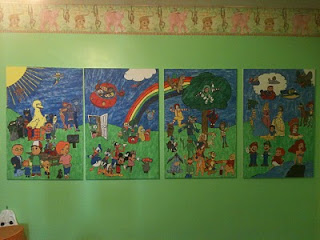