Yesterday Edward and I went over to the school to pick Ruby up from soccer. I was walking with the dog and he was riding his bike. When we arrived I walked over to help Ruby get her bag, and when I turned around Edward was gone. Any parent will tell you that there is a sudden involuntary moment of panic when you realize that you do not know where your child is, and I looked around frantically for a while, calling his name out over and over again, before I stopped. “This is silly,” I thought. “I know where he is.”

I walked over to the deli on the corner and, sure enough, there was his bike parked outside. We walked in to find him at the counter, attempting to buy a bag of Fritos. This was impossible, however, as he did not have any money. I explained to him that he had better never leave without telling me where he was going ever again, and he seemed receptive to this suggestion. “I’m sorry Daddy,” he said adorably, “I will prrrrrrobably try and tell you next time if I remember.” That boy.

My wife had an excellent observation when I related the story to her later last evening. She said “Being a  grown-up isn’t all buying chips.” And this is exactly what I want to tell him. He is so independent, and so “ready” to be grown-up. He is literally counting down the days until he is 16 and can get a car. The boy just turned 6. And I want to grab him and shout “Being an adult is not fun! Being a kid is way better! Slow down! Enjoy it! I would trade places with you in a heartbeat!” But he does not care. He wants to grow up. In fact, he thinks that he already has.

Ruby shares my point of view. She was very upset this year on her birthday, because it meant one more year of childhood was gone. Yeah, the angst has started already. But I get it. I never really looked forward to growing up as a kid. I looked forward to milestones, like being able to drive and vote, but I never had this grand idea of adulthood in my head. Back then I had no idea how hard adulting was going to be, I thought adults had it together, but I still wasn’t rushing to be one. Some might argue that this is still the case. But ready or not, here I am.

I am trying not to lie to him about adulthood, but he doesn’t seem to care. He wants to be big. We just have to hope that there isn’t a Zoltar machine anywhere around. 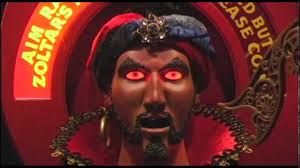 Edward. Slow down. Relax. Be a kid. Enjoy it. Reach, yes. Stretch, always. Grow as you must, but not so fast. You are only 6. You don’t need to be racing off to the store on your own. You need to be laughing and playing and staying nearby. Adulthood will come sooner than you think, and there’s no going back. And I won’t lie and say there aren’t some great things about being a grown-up, but remember (and this is very important), it’s not all buying chips.